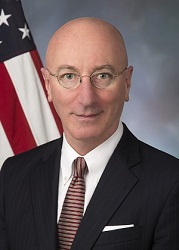 Mark A. Robbins was nominated by President Barack Obama on December 5, 2011 to serve as a Member of the Merit Systems Protection Board for a term of seven years, and was confirmed by the U.S. Senate on April 26, 2012. On January 23, 2017, President Donald Trump designated Mr. Robbins Vice Chairman. Pending re-establishment of a Board quorum, Mr. Robbins performed the functions vested by Title 5 in the Office of the Chairman for the remainder of his Board service.

Mr. Robbins' term ended on March 1, 2018 following which he served a one year statutory carryover year. On December 20, 2018, President Trump issued a memorandum directing Mr. Robbins to serve concurrently as General Counsel at the U.S. Office of Personnel Management, a position he held from 2001 to 2006.

At the time of his nomination, Mr. Robbins was the General Counsel of the U.S. Election Assistance Commission. He previously served as a Senior Rule of Law Advisor for the State Department in Babil Province, Iraq, where he was awarded the U.S. Army’s Commander’s Award for Civilian Service. Mr. Robbins also served as Executive Director of the White House Privacy and Civil Liberties Oversight Board between 2006 and 2008. Prior to his initial service at OPM he worked in private practice as a litigation attorney in Los Angeles, California between 1988 and 2000, and in the White House Office of Presidential Personnel from 1984 to 1988. Mr. Robbins began his career as a Legislative Assistant to two Los Angeles area Members of Congress, covering, among other things, civil service and federal human resources management issues.

Mr. Robbins earned his undergraduate and law degrees from George Washington University. He is a member of the California and District of Columbia bars. In recognition of his extensive professional involvement and continued leadership in public administration, in 2013 Mr. Robbins was elected as a Fellow of the National Academy of Public Administration. 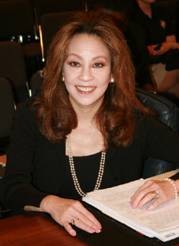 Tsui Grundmann was nominated by President Barack Obama to serve as a Member and Chairman of the MSPB on July 31, 2009. She was confirmed by the U.S. Senate on November 5, 2009, and sworn in on November 12, 2009. Chairman Grundmann’s term expired on March 1, 2016, and she continued to serve as Chairman until January 7, 2017, under the Board’s enabling statute that permits a member to remain for up to one year, or until a new member is confirmed and sworn in to succeed that member.

Previously, Ms. Grundmann served as General Counsel to the National Federation of Federal Employees (NFFE), which represents 100,000 Federal workers nationwide and is affiliated with the International Association of Machinist and Aerospace Workers. At NFFE, she successfully litigated cases in the U.S. District Court for the District of Columbia and the U.S. Court of Appeals for the District of Columbia. In 2004, Ms. Grundmann represented NFFE and other labor unions in the statutory “meet and confer” process with officials from the Department of Homeland Security (DHS) and OPM, which sought agreement on how to proceed with new DHS personnel regulations. She represented NFFE and the United Department of Defense Workers Coalition, consisting of 36 labor unions, and served on the Coalition’s litigation team in a coordinated response to proposed personnel changes at the Department of Defense (DoD). In addition to DoD employees, Ms. Grundmann represented employees in the Forest Service, Department of Agriculture, Passport Service, Veterans Administration, General Services Administration, and some 25 additional Federal agencies. From 2003 to 2009, she was a regular instructor on Federal sector labor and employment law at the William W. Winpisinger Educationand Technology Center in Hollywood, Maryland. Prior to joining NFFE, Ms. Grundmann served as General Counsel to the National Air Traffic Controllers Association. She began her legal career as a law clerk to the judges of the Nineteenth Judicial Circuit of Virginia, and later worked in both private practice and at the Sheet Metal Workers’ National Pension Fund. Chairman Grundmann earned her undergraduate degree at American University and her law degree at Georgetown University Law Center. 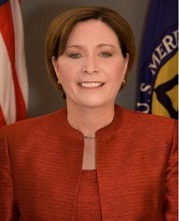 Anne M. Wagner was nominated by President Barack Obama to serve as a Member of the MSPB with the designation of Vice Chairman on July 31, 2009. Her nomination was confirmed by the U.S. Senate on November 5, 2009, and she was sworn in November 12, 2009. Although Ms. Wagner’s term expired on March 1, 2014, she continued to serve in her position until March 1, 2015, in accordance with MSPB's governing statute, which specifies that a member may remain on the Board for a period of one additional year, or until a successor is confirmed, whichever occurs first.

Ms. Wagner came to the MSPB after serving as General Counsel of the Personnel Appeals Board of the U.S. Government Accountability Office (GAO). Prior to that, Ms. Wagner was appointed by the U.S. Comptroller General to serve a five-year statutory term as a Member of the GAO Personnel Appeals Board. Ms. Wagner began her career as a staff attorney in the Office of the General Counsel of the General Services Administration, where she primarily handled labor and employment issues. From there, she went on to become an Assistant General Counsel for the American Federation of Government Employees (AFGE), AFL-CIO, the largest Federal sector labor organization representing more than 600,000 Federal and District of Columbia government employees. In her nearly 20 years with AFGE, she led precedent-setting litigation and handled cases arising under the full array of laws governing Federal employment. Ms. Wagner graduated from the University of Notre Dame and received her J.D. from the George Washington University, National Law Center. She is admitted to practice law in the District of Columbia, Maryland, and Illinois as well as before various Federal Courts, including the U.S. Supreme Court.